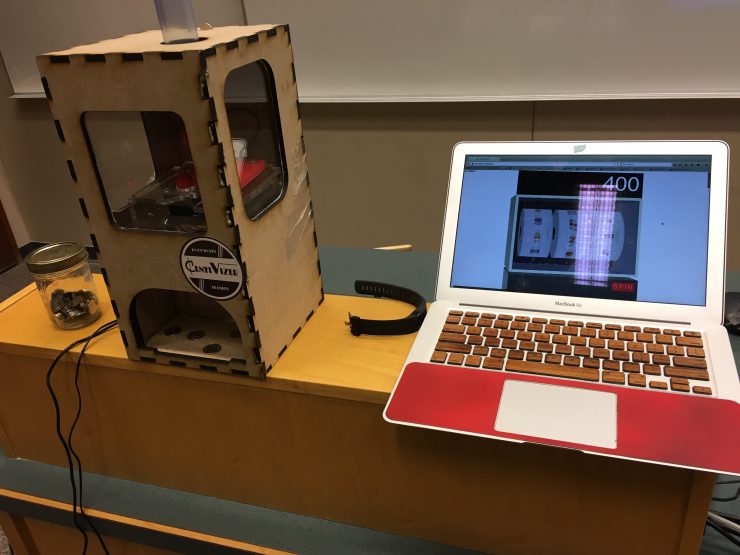 by  Mark Chignell, KMDI Director, Professor in the Department of Mechanical and Industrial Engineering

Brain Awareness Week is a “worldwide celebration of the brain that brings together scientists, families, schools and communities”. This year the week was held March 13-19, and I was invited by Dr. Thomas Hadjistavropoulos of the Department of Psychology to give a talk at the University of Regina as part of their observation of Brain Awareness Week. Dr. H. and I are Project Co-leads (he in WP 6.3, pain assessment, I in WP 6.1 mental health assessment) in Work Package (WP) 6 of the AGE-WELL National Centre of Excellence) and it was my first trip to Saskatchewan after 27 years living in Canada. 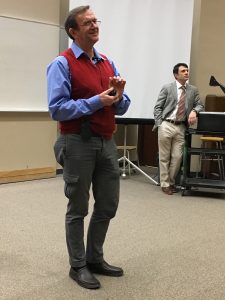 The rest of the day I toured Regina with Professor Hadjistavropoulos,  a very gracious host. That afternoon, with some amazing technical support, I gave a demo of our Centivizer system for managing behavior in dementia. I introduced the concept of Ambient Activity Technologies now being marketed by a new company of the same name led by industrial partner Marc Kanik. You can see a nice video of ambient activities being used by people with dementia in long term care here.  We had  70-80 people in attendance and I was pleased to see a number of people from the community, with personal experience of dementia, in the audience.

I flew out to Edmonton, taking the opportunity to visit my colleagues there while I was in the vicinity. In addition to meetings with my AGE-WELL colleagues Profs. Eleni Stroulia and Lili Liu, I gave a slightly modified version of my brain awareness talk at the University of Alberta and a demonstration of the Centivizer system.

My hosts in Edmonton arranged a visit with two long-term care homes, Capital Care Group. What a great opportunity to get some feedback on the Centivizer prototype!  I found the staff at Capital Care to be very open to the use of technologies that can provide engaging activities and thereby reduce the prevalence of the responsive behaviours (hitting, screaming, etc.) that often occur in the later stages of dementia. 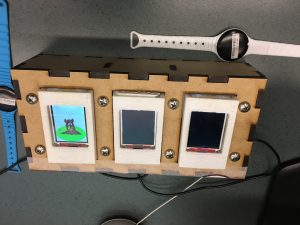 One memory sticks in my mind and that was a gentleman with vascular dementia who played the Whacamole game on the Centivizer system. The game works by dispensing a nickel each time the person hits a mole in the game. To make it more suitable for people with dementia we have developed haptic screens where the screen itself is the button and you actually hit the mole on the button/screen which is much more satisfying than touching it on a touchscreen.

What was fascinating in this case though was that ever time a nickel was dispensed the man put it in his pocket with a great air of satisfaction. He eventually decided that the nickels weren’t coming fast enough and reached in to our nickel jar and grabbed a handful of nickels. The staff were horrified and asked him to put the nickels back. But I was overjoyed and said he could keep them as it was a great indication of how motivating nickels can be for some people with dementia. Once you see reward motivation like this it becomes a lot easier to get people to do activities that can help their physical and cognitive functioning.

Here’s a video recording of the demonstration of the Centivizer: https://youtu.be/C5pg6fOrzaw

The Centivizer system is being developed with Andrea Wilkinson, Farzad Nejatimoharrami, Thomas He, Henrique Matulis, Tiffany Tong, and Oleksii Shevchenko. We are planning to pilot test the system in long term care starting this summer.

For more information about the Ambient Activities see www.ambientactivity.com.

For questions and comments feel free to contact me at chignell@mie.utoronto.ca