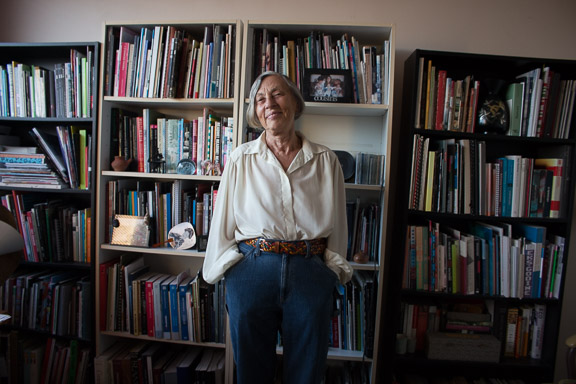 Nina Czegledy spoke to KMDI writer Raquel Russell about life as fellow, KMDI a decade ago and how she got started.

When entering Nina Czegledy’s home, the first impression one receives is of a person who loves art and books. This long-involved U of T fellow, inspires, researches, and challenges groups in the arts and sciences fields of which she’s made a home.

Czegledy is a KMDI Senior Fellow, U of T Fellow, adjunct professor at the Ontario College of Art and Design University (OCADU) and sits on many arts and science boards across the country.

One of Czegledy’s recent projects at KMDI included The “Extension of Man: Hacking the Body” workshops focused on prosthetics and presented in collaboration with Adriane Ieraci at the Think Tank Lab later known as Semaphore Research Cluster directed by Matt Ratto. These workshops aimed to expand knowledge and perspectives on what a prosthetic is, and how it can relate to open source technology in terms of socio-technical, ethical, and cultural issues.

Czegledy says “there’s a big need for a particular prosthetic joint” which they created at the Semaphore Lab through the 3D technology.

“Early DIY workshops…were really useful, because we had the general public coming in,” she says.

The participants explored the use of micro-controllers in prosthetics by building a prosthetic glove capable of basic environment sensing and orientation detection. The workshop had guests involved in clinical and business practice in addition to amputees contributing their personal experience. In addition to Toronto they had a co-located workshop with Concordia University, Montreal as well as workshops in Manizales Colombia and in Zagreb, Croatia.

There is an increasing need for prosthetics today – says Czegledy – especially in consideration of key health care problems due to the dramatically increased life expectancy of the population such as the elderly suffering from vascular disease and solutions for amputees due to diabetes in the industrialized world and land mines in many other regions. Consequently the 3D programmed joints (between organic and artificial body parts) developed at the Semaphore Lab) are of immense value. And creating awareness among the early workshop participants from the general population remains worthwhile. 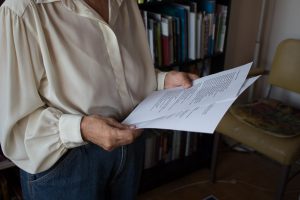 Two words that appear often in Czegledy’s career are ‘interdisciplinary’ and ‘collaboration’. Excited by these concepts and recognizing these qualities in KMDI, she started working with the Institute in 2005.

“I always work in interdisciplinary ways,” she says. “I remember that I was suggesting that we have brown bag lunches.” Her hope was that people in different places at KMDI could stop by for a bit and talk about what they do.

The present day iteration of that desire is much like KMDI’s Coffee Club and Student Seminars. However, a researcher at heart, Czegledy hopes for more venues for professional researchers to meet in informal situations and catch up.

From a young age, Czegledy expressed interest in research collaboration and artistic expression.

“I was interested in art from early [teens], but I had to make a living,” she says. “So, I studied science and I worked in research science.”

In addition to her training in biology Czegledy also received training in the arts. She published papers on the topics of research genetics at the Hospital For Sick Children, Toronto during the 80s and 90s. The work included the development of biological time-lapse films and videos.

At the time there was no available methodology, she says, for fixing cameras for this particular purpose on light microscopes, to record tissue movements for research experiments – it had to be invented.

“[This was] quite artistic scientific research,” she says, “because you had to make a time-lapse movie, and you had to edit, and it had to be good looking.”

Much has changed when it comes to conversation about arts and science and Czegledy is happy to see that. She’s glad that the interdisciplinary discussion has broadened beyond chemistry, astronomy and society’s thoughts on traditional scientific studies.

“Now social sciences are just as much part, if not a bigger part,” she says. “Environmental sciences, activism by artists.  All of this is now much more [prevalent].”

Czegledy also reflects that today there are more joint academic degrees than ever before in science, art and technology.

With her focus on arts and science, Czegledy curates projects in Canada, Mexico, Europe and around the world. She is co-curating a conference in Colombia that is focused on “traditional knowledge transfer” by indigenous people. At such events, individuals share their oral histories and experiences that is unconventional in academia.

It is through her ability to work with others, and her great contributions to academia that Nina Czegledy continues to be an inspirational part of the KMDI community.