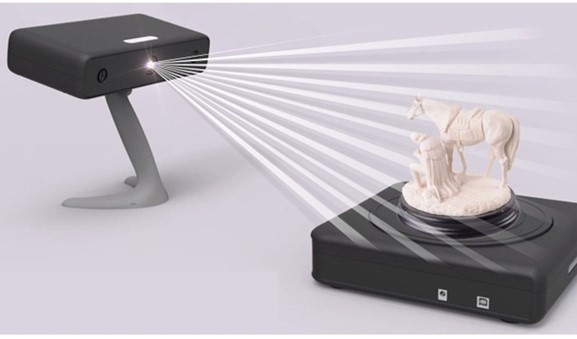 When you see 3D animation that is visually stunning or archaeological artifacts preserved in a digital modeling format have you ever wondered what makes this possible?   3D Scanners. They have opened us up to a digital realm that can help film, education, medical science and more.

3D scanners analyze real-world objects by mapping the outer surfaces of an object with light (photographs or laser light). The depth data gathered is converted into information that can be saved as a digital 3D model in software.   These digital models can be used to produce realistic and stunning animations and graphics for applications in entertainment, engineering, medicine, etc.

Although different 3D scanners work in various ways they all have the same basic function. They measure the distance between the scanner and the surfaces of the objects in their view like Laser Cameras.

The most visible application of 3D scans is in entertainment, specifically in live-action movies with fantasy elements. Most movies use realistic 3D models of people, props, and environments to create animations and visual effects (VFX). A notable example of 3D scanning applied in movies is found in the modern Planet of the Apes series. The Planet of the Apes production team brings life to the iconic Apes.  Sci-Fi, Fantasy, modern Action-Adventure movies and TV shows use 3D modeling to generate striking animations and scenes that would otherwise be too complex to create.

Similarly, 3D scanning brings photo-realistic assets such as environments, objects, and characters to life in video games. Game developers and artists pour hours into creating high-quality, interactive 3D objects and props to be used in video game sets. Instead of designing these objects and their textures from scratch, a 3D scanner can reduce this tedious process to a few minutes.

“I can think of a few purposes for which the Room Scanner app is useful. For instance, game-level designers can use it as a dimensionally accurate reference to create an interior for a video game. It’s also very handy to take quick measurements, because making a scan only takes a minute and the app has a built-in measuring feature.”

Unity is one of the most popular video game developing software. In Unity, 3D models can be used as a scene or an interactive object in the scene. Combining 3D scanning with Unity, anyone can create a simple video game with minimal programming or artistic knowledge. This is accessible to anyone with a smartphone and a computer.

“We talk a lot about 3D printing in the medical industry, from 3D printed knee replacements to hearts. But there is much more to discover within 3D technologies. For instance, 3D scanning. This technique enables doctors around the world to literally look inside the patient in just a matter of seconds!”

3D-imaging goes beyond the film and video world for practical uses.  For instance, 3D scanning and modeling are techniques used in Archeology to preserve artifacts in digital format. Digital modeling allows for the study of artifacts remotely and shows them through online museums and galleries.

In medicine, 3D scanning is a safer and faster alternative to traditional body imaging such as x-rays and MRIs. By combining 3D printing with 3D scanning and modeling healthcare is improved. For example, prosthetic legs and arms are now more accurately customized for each patient by using 3D scans, making them a perfect fit for each individual patient. In engineering and industrial design, different methods of 3D scanning are used for quality control. The level of accuracy of these scans, down to the nanometer, opens a world of possibilities for engineers and designers.

The KMDI Makerspace has multiple 3D scanners that can be used to model objects up to 16″ (400mm) in size. Currently, the KMDI Makerspace is closed, however normally our scanners are available to U of T students and faculty for research, hands-on learning, and professional development.

Sign up for the monthly newsletter to stay up to date with KMDI Makerspace news and events.