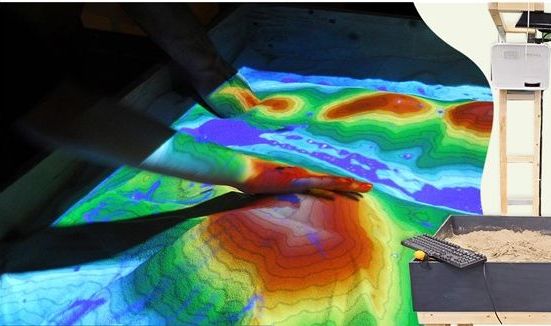 When was the last time you played with sand and sculpted something fun? The times when you were sitting on the beach using piles of sand to make castles, tunnels, and mountains with shovels and buckets seem far away.  Now you can relive the memory with something more sophisticated.

The 3D Sandbox, or the Augmented Reality (AR) Sandbox, is a one-meter squared box filled with fine loose sand and a Kinect camera and projector hanging overhead. Participants can shape the sand to create hills, valleys, and rivers. The magic lies within the Microsoft Kinect 3D camera, the 3D visualization software, and the projector. They work together to measure the elevation of the sand’s surface on a millimetric scale and then overlay a colour-coded topographic map atop the sand in real-time.

“With the reality of climate change, communities are seeing an increase in severity and frequency of extreme weather events like flooding, heat waves and storms,” said Rhonda Bateman, Chief Administration Officer at Lower Trent Conservation, Ontario.

The 3D Sandbox is a tool that helps the Lower Trent Conservation area view or measure the aspects of climate change more easily.  This fosters a better understanding of climate change, how it impact the community at large and leads to possible solutions.

The real-time simulation makes 3D Sandbox a great story-telling device to demonstrate impacts of climate change, such as erosion and flooding. When participants take out a certain quantity of sand with their hands or a shovel, the camera automatically records the physical movement below and computes the topographic contours of the sand’s surface. It then applies the contour lines and colours to show the surface decline. The squiggly lines indicate how tall it is and how steep or gentle the slopes are, with red meaning high elevations and blue meaning low. 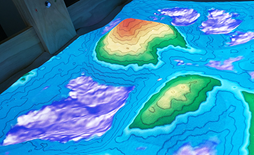 Participants can even make it rain by putting their hands above the sandbox. The 3D visualization software will simulate the raindrops, and a torrent of blue water will flow naturally down the peaks and gather in the low spots.

The 3D sandbox was initially developed to understand freshwater lake and watershed science.

A team of researchers at UC Davis constructed the AR Sandbox in 2012 as part of a National Science Foundation-funded program.  In the video showing the prototype, the researcher used a shovel and a rake to create hills, valleys, rivers, and rains.

“There’s just no better way to teach how topographic contour lines work, or how water flows over a landscape, than building whatever terrain you can imagine, and then seeing the contours and the water react in real time to any changes you make,” explains Oliver Kreylos, one of the lead UC Davis researchers on the project. Since it is an open-source software, researchers continue to explore how they can develop new functionality to show pressing issues, such as simulating natural flood management.

The 3D Sandbox is a popular interactive public display at hundreds of museums around the world. At ECHO Lake Aquarium and Science Centre in Vermont, more than 43,000 visitors have engaged with the installation in three months.

“We have watched our guests at every age dig in and explore with their hands, ask lots of questions, test ideas, and express curiosity and joy”, says Julie Silverman, the museum’s Director of News.

“The Sandbox is a rare exhibit with replay value; people actually come back later for more time playing in the sand.”

Additionally, it is a great teaching tool that has been used in the many classrooms. Teachers used it to demonstrate geologic and hydrologic concepts such as visualizing the landforms, understanding drainage basins, and investigating the impacts of coastal erosion. Students are immediately drawn to the AR Sandbox and start to experiment their ideas without much training. The real-time feedback, colourful surface, and the tactile experience of creating different shapes keeps us engaged.

Currently, the KMDI Makerspace is closed, however normally the sandbox would be available to U of T students and faculty for research, hands-on learning, and professional development.