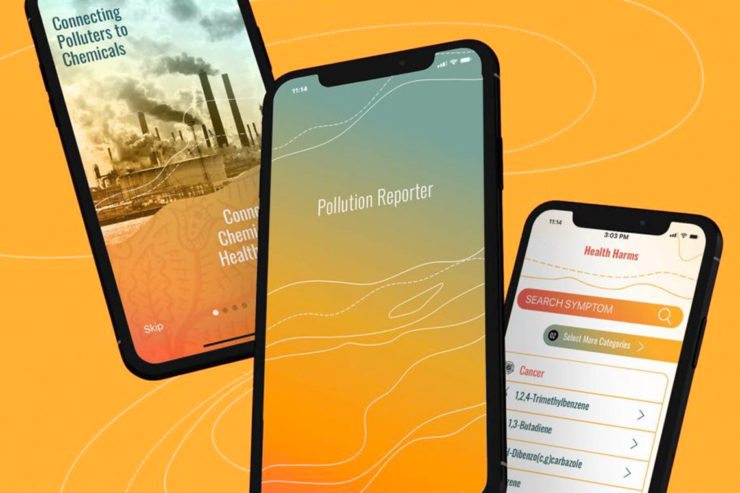 Lack of public data about dangerous pollutants in Chemical Valley, as described by the recent Ministry of Environment whistleblower, underlines the urgent need to have pollution data connected to responsibilities for health effects. The inadequate pollution prevention, monitoring, and data provided by the government and corporations in Chemical Valley presents an ongoing serious concern for Aamjiwnaang First Nation.

The Pollution Reporter App hopes to be a step in the right direction. It offers an easy and accessible way for community members and the public to easily make reports about pollution, or search for information by symptom, health harm, or chemical. The app is focused on the Imperial Oil Refinery in Sarnia, one of the oldest refineries in the world, a major industrial player, and the biggest polluter in Ontario’s Chemical Valley.

The Pollution Reporter App can be used in two ways. First, users can report pollution incidents, spills, leaks, and flares to Ontario’s Ministry of Environment using their email. Currently, community members report incidents to the Ontario’s Spills Action Centre by telephone. The app makes reporting simpler and more accessible, and users will have a copy of their reports to share. Second, users can connect pollution emissions data with research about known health harms. The app works by linking publicly-available data on refinery emissions from the federal government’s National Pollutant Release Inventory to known health harms based on peer-reviewed medical literature.

Pollution Reporter does not just use data, but provides an analysis of how existing data sources fail to hold polluters responsible. The app is built for community users and translates technical and obscure jargon about pollutants into accessible information. The Technoscience Research Unit team hopes the Pollution Reporter App will be useful for community members to advocate for the health of their lands, waters, and community. While this first version of the app focuses on one refinery, future versions will include all facilities in Chemical Valley.

More About Technoscience Research Unit: Pollution Reporter is a part of the Indigenous-led project, The Land and the Refinery: Past, Present, Future, at the Technoscience Research Unit at the University of Toronto. The project is led Professor Michelle Murphy, Aamjiwnaang environmental researcher Vanessa Gray, Lab Manager Kristen Bos, environmental justice researcher Reena Shadaan, and digital justice researcher Ladan Siad. The lab is researching the history, operations, and pollution activities of the Imperial Oil Refinery in Canada’s Chemical Valley, which is the oldest running refinery in North America. Chemical Valley is located on Anishinaabe land and surrounds Aamjiwnaang First Nation from all directions. The project’s website, The Land and the Refinery: Past, Present, Future, will also go live during the Toxic Tour. https://www.landandrefinery.org/