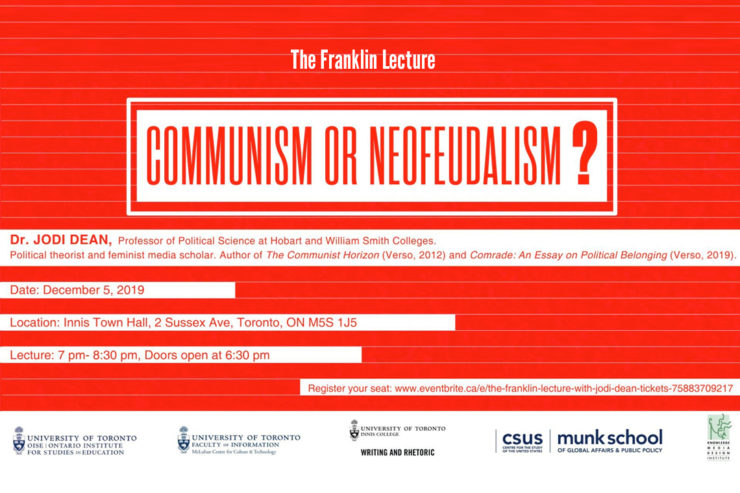 Who is Ursula Franklin, and what does she represent?

Ursula Franklin was a scholar, a scientist and an activist. She conducted research and taught at the University of Toronto for over 40 years and was the first female professor to receive the designation of University Professor (the university’s highest honour). She was an expert in metallurgy and materials science, and primarily taught in the Faculty of engineering, but she was also interdisciplinary, both in her own work and in her impact. She was a member of the Science Council of Canada, where she contributed to several influential studies, including a truly landmark report outlining Canada’s responsibilities for combatting environmental degradation published in 1977. In 1989, she delivered a Massey Lecture called The Real World of Technology, which was later turned into a bestselling book, which in turn became a foundational text across the many disciplines concerned with better understanding the relationship between technology and society. Through her work in contemporary philosophy of technology, Ursula Franklin made vital contributions to The Toronto School of thought, along with Harold Innis, Marshall McLuhan and Northrop Frye.

Last year, the KMDI held consultations with its various stakeholder groups, in part to solicit new ideas for activities and initiatives that the Institute might lead, or otherwise get involved with. One of the ideas to come out of this was proposed by long-time KMDI member Professor Emeritus Peter Pennefeather (Faculty of Pharmacy), who suggested that the KMDI take the opportunity of the 30-year anniversary of Franklin’s Massey Lecture to work on advancing recognition across the University of her continued, and often profound, influence on theories of technology and society, feminism, and community justice. This inspired the KMDI to initiate a series of new partnerships with departments and scholars interested in marking this important anniversary, and using it as a catalyst to deepen Franklin’s visibility as a key thinker in The Toronto School. Activities include my own involvement in a McLuhan Centre for Culture and Technology Working Group, being convened by Professor Leslie Shade (Professor, Faculty of Information), along with Peter Pennefeather, Leslie Chan (Associate Professor, Centre for Critical Development Studies, UTSC), and several graduate students. The working group is looking at the Ursula Franklin Fonds, and exploring ways to extend the celebration of Franklin’s impact beyond this anniversary year. The KMDI has also partnered with the McLuhan Centre for Culture and Technology, Innis College’s Writing & Rhetoric Program, OISE’s Department of Social Justice Education, and the Centre for the Study of the United States to create a new annual lecture series, which we have named The Franklin Lecture, to honour the importance and lasting influence of Ursula Franklin’s work, and continue her tradition of fostering conversations between Science and Technology Studies and the Humanities.

Who is Jodi Dean and how does she relate to the Ursula Franklin lecture series?

The inaugural Franklin Lecture will be delivered by Professor Jodi Dean (Political Science, Hobart and William Smith Colleges, New York). Dean is an influential political theorist and feminist media scholar. Much like Franklin, Dean is equally engaged in both interdisciplinary scholarship and in social activism. Like Franklin, her work is used and cited by scholars across a wide range of disciplines, and her theories advance our understanding of technology’s impact on politics, economics, and social movements. Her talk will focus on ideas put forth in her most recent book, Comrade: An Essay on Political Belonging (Verso, 2019), about the current, global restructuring of labour and once-shared resources. Given the close attention that Franklin gave to these same processes in The Real of Technology, Dean’s talk will surely provide a provocative and pertinent introduction to The Franklin Lecture series.