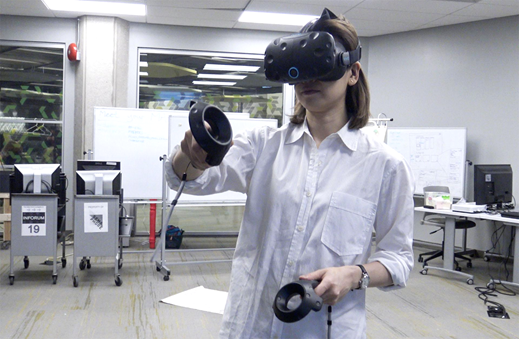 Imagine being able to show someone else your vision more clearly by a 3-dimensional digital world you created.  Whether it’s fashion, a creative piece or a scientific educational model Virtual Reality (VR) allows you to share your thoughts more accurately and vividly with others.

VR, or Virtual Reality, is an experience that immerses users into a simulated world. It brings people the full experience of a three-dimensional, computer-generated virtual environment via electronic equipment, such as a headset. When people put on the headset, they are seeing the display right in front of their eyes without distraction. These virtual environments are designed to be as realistic as possible, creating a level of immersiveness that causes users to believe that what they are perceiving through their vision, hearing, and touch is real. They then react to stimuli as they would in the real world.

After over 90 years of experimenting and prototyping, today’s VR is more than just for games and entertainment. Due to its interactive abilities, VR is an increasingly popular application in a variety of fields such as healthcare, fashion, and education.

“I was amazed at how realistic it was,” said Dr. Peter Ferguson, head of orthopedic surgery at the University of Toronto’s Temerty Faculty of Medicine.

The medical school has bought a dozen of Canadian-made virtual reality systems, allowing surgical residents to practice techniques, such as knee replacements, through a simulated process without entering an operating room.

“If we can decrease incidences of complications by allowing these individuals to become more competent in this low-stakes environment, it will theoretically improve patient outcomes,” said Dr. Ferguson.

Similarly, the hands-on, interactive feature also makes Virtual Reality a new solution in fashion design. For years, the drawings of garments were done by pencil and paper or programs such as Adobe Illustrator. As digital innovation grows, so do the opportunities brought by VR.

“When you’re in Virtual Reality, you can create freely, try different forms and shapes, experiment and try several options,” said Chiara Vincenzi, an art and design professor at the University of Illinois Urbana-Champaign.

In Vincenzi’s class, students use Tilt Brush, a 3D-painting virtual-reality application available from Google, to create a dress design. During the first stage of ideation of a fashion garment, students are encouraged to go around the mannequin and explore shape, colour, and texture in the virtual world.

It was challenging for students at first because they were accustomed to using traditional tools, but after trying the new brush, they found it fun to experiment with the program. Vincenzi believes this process is more flexible and spontaneous, allowing her students to see their creations in different dimensions.

With the use of VR kits at the Makerspace, Michelle Lui, a postdoctoral researcher at University of Toronto Mississauga’s Institute of Communication, Culture, Information and Technology, and Rhonda McEwen, Associate Professor at Semaphore Lab, created a VR application for a second-year microbiology course at Carleton University. 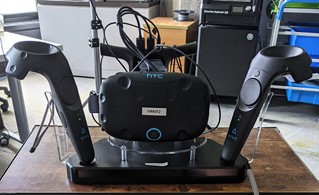 “I was drawn to immersive technologies as a medium for learning abstract scientific concepts in part because you can engage the learner on a number of different levels,” said Michelle.

The VR simulation allows students to observe and interact with gene regulation processes, making it easier for them to grasp complex concepts that are fundamental to the upper-year microbiology courses. It has widely received positive feedback from the students.

Since the implementation of social distancing policies in 2020, VR has experienced an enormous rise. The future of VR is promising, as researchers and companies are trying to make the hardware smaller, lighter, and cheaper. This transformative technology will continue to revolutionize all kinds of industries.

Currently, the KMID Makerspace is closed, however normally the VR kit would be available to U of T students and faculty for research, hands-on learning, and professional development.